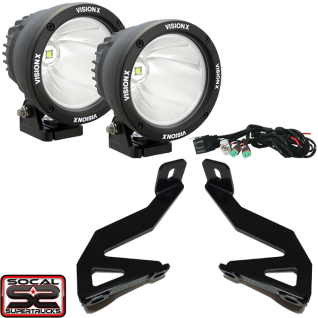 The SoCal SuperTrucks 2009-2014 Ford F150/Raptor Hood Cowl Light mounts lead the industry in form, fit, and function. SoCal SuperTrucks goes the extra step to ensure a well thought out product that will outlast the competition.The 2009-2014 Ford F150/Raptor Hood Cowl Light brackets are made from high quality US made steel material.

SoCal SuperTrucks decided to expand on their popular line of LED light mounting brackets to bring you a clean and simple way to bolt on a LED light in front of your windshield above the hood cowl. No drilling is necessary when installing the SoCal SuperTrucks hood cowl light mount kit. Install up to a 5″ diameter light with no worries of interference, even with your hood open. The hood cowl LED light mount bracket is finished in a high quality semi gloss black powder coat to ensure a long lasting product.

4.5″ Light Cannon uses a single source 25-Watt LED and advanced IRIS reflector technology to place it at the top of its class in the single source LED lighting division.

The Light Cannon utilizes a focused beam pattern to provide 1,000 feet of usable light, and is housed in a robust black aluminum polycarbonate hybrid housing for long lasting durability, even in the most extreme conditions.The Two Light Kit adds an additional 1,000 raw lumens to your build, bringing the total output to 2,000 raw lumens of light saturation between the two lights. Includes wire harness.