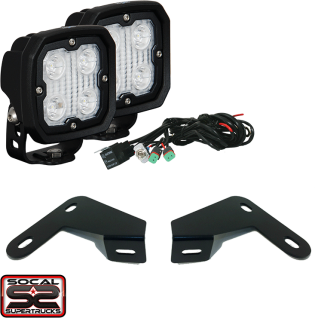 The SoCal SuperTrucks 2009-2014 Ford F150/Raptor rear bumper back-up mounts lead the industry in form, fit, and function. SoCal SuperTrucks goes the extra step to ensure a well thought out product that will outlast the competition.The 2009-2014 Ford F150/Raptor rear bumper back-up brackets are made from high quality US made steel material.

SoCal SuperTrucks decided to expand on their popular line of LED light mounting brackets to bring you a clean and simple way to bolt on a LED light to the back of your truck. The 2011-2015 Ford SuperDuty Back Up light mount kit gives you an easy way to mount a small LED light underneath the back of your rear bumper. The factory Ford bumper has no place to add a light so we created a bolt on bracket that installs in minutes. No bumper removal is necessary when installing the SoCal SuperTrucks back up light mount kit. The back up light mount bracket is finished in a high quality semi gloss black powder coat to ensure a long lasting product.