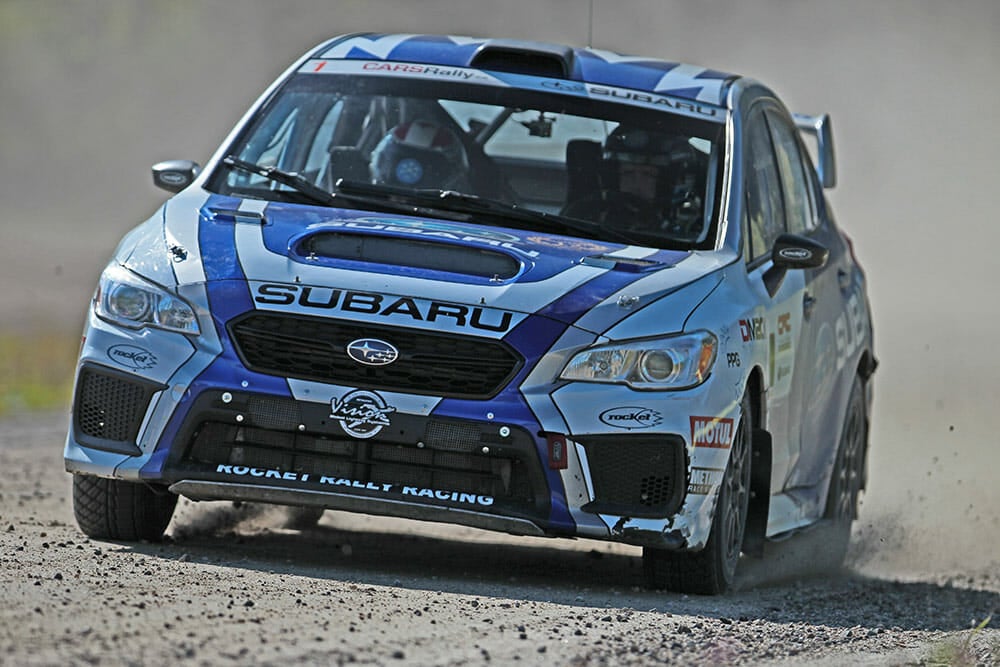 With famously rough roads, Defi is a notoriously tough rally. And 2017 was no exception. Antoine and Alan started the rally strong finishing the first long stage in the lead ahead of a quick, ‘exotic’ European-spec R5 Fiesta. Into the second stage, SRTC encountered a minor issue as well as a puncture, ultimately resulting in the loss of the lead. Back in service the Rocket Rally crew re-prepped the car and sent it on time. The remainder of day for Antoine became about managing the position and waiting for an opportunity to pounce.

By mid morning on Day 2, the opportunity presented itself. The day began with two passes on a long stage. By the second pass on Stage 11, Rallye Defi had become a war of attrition at the top of the leaderboard. Barry McKenna driving the R5 Ford Fiesta – who had inherited the lead on Day 1 because of Antoine’s mechanical issues – retired due to a significant mechanical failure. Boris Djordevic, driving an ex-L’Estage Evo also retired due to a mechanical issue. With Antoine back in the lead, and 10 stages remaining, the rally was far from over. But with experience comes patience; and coupled with a mechanically strong car Antoine maintained the lead for the remainder of the rally, finishing over seven minutes ahead of the second-place car.

Like Baie, Defi is a very tough rally. “It was a great team win” said Antoine. “The conditions were very difficult following the rain that the area had in the summer. Our car was very strong. The Rocket Rally guys did a great job keeping the car in top form. This shows the strength of the SRTC STi. The conditions were crazy and a lot of people had terminal failures over the rough terrain.”

The podium was a Subaru 1-2-3. Of note is Brandon Semenuk’s third-place finish in the Rocket Rally Racing Subaru Crosstrek. This was Brandon’s second rally of 2017 and a strong finish following his first-place finish at the Rocky Mountain Rally in May.

This result bumps Antoine into the overall lead by four points. With three rallies remaining, it will be a tight race to the championship. Next up, back out West to the Pacific Forest Rally in Merritt British Columbia, October 13-14.