We recently qualified for what most consider to be the hardest and most difficult race in the country, King of the Hammers 2016. If you are not familiar with this race, we are competing in a relatively new sport, the Ultra 4 Series, which combines fast desert racing with extremely hard rock crawling.

SEI Racing is owned by Dennis S. “Chip” Sterndahl. Chip has had various off road toys since the late 60’s and currently enjoys trips to Glamis with his Sand Car. Chip is also the owner of Sterndahl Enterprises which was founded in 1982, the inspiration behind our car’s number. Sterndahl is a full service Striping, Stripe Removal & Traffic Control Company, specializing in Highways and Airports, and is one of the largest striping companies in Southern California. Chip and his wife love the outdoors and they enjoy spending time with their family and friends.

Our driver is Donald Fisher (a mechanic and fabricator at Sterndahl) who has been an extreme off-roader for 15 years. Our co-driver is Tom Gilpin (a Foreman at Sterndahl) and has been an extreme off-roader for 10 years. Together, Tom and Don have built off-road rigs and traveled to many locations including the Rubicon, Moab, Johnson Valley, Dove Springs, Jawbone, Surprise Canyon, Dusy Trail, and many others.

The entire SEI Racing Team consists of family members and close friends. We have elicited different skills, tasks and talents from our family and friends to help build the race car and create the best racing team possible. The SEI Racing Team will be at the races cheering and supporting the team. 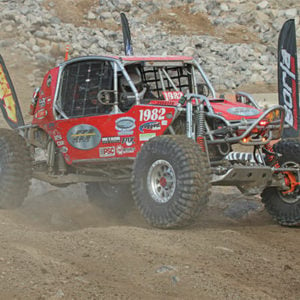 Our Car, “1982,” started as a rock crawler and was transformed into an extreme race car. It currently has a LS3, a Turbo 400 built by Performance Allison, an Atlas 2 Transfer Case, GearWorks Spider 9 front and rear axles with Detroit Lockers, Fox Coil over, and Fox Triple Bypass shocks.

We are striving to make this car a real competitor in the Ultra 4 Racing Series.