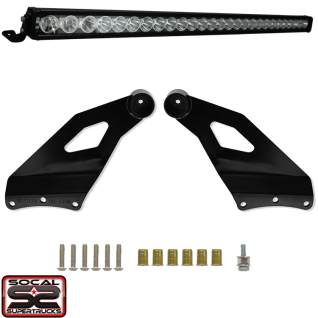 The SoCal SuperTrucks 1999-2006 or 2007-2013 Chevy Silverado 50″ LED light bar mounts lead the industry in form, fit, and function. SoCal SuperTrucks goes the extra step to ensure a well thought out product that will outlast the competition. The 1999-2006 or 2007-2013 Chevy Silverado / GMC Sierra 50″ led light bar brackets are made from high quality US made steel material.

The roof mount brackets install in the door jam to allow protection from the elements and prevent water from leaking into your vehicle. SoCal SuperTrucks worked tirelessly perfecting the design to allow the brackets to go inside the door jam versus the top of the roof. Grip sert nuts are used to fasten into the body, drilling is required, and allow a fast and simple installation.